Playing with dolls is not what it used to be 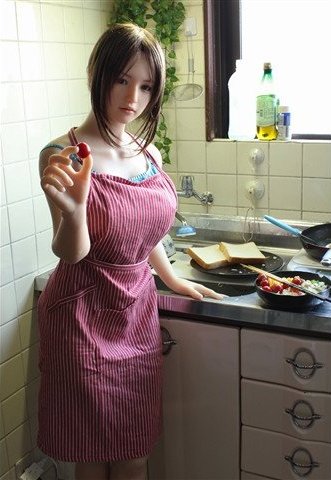 The cute young lady on the left was the winner of a ratherunusual beauty contest held – where else? – in Japan. I’d love to tell you her name, but… she doesn’t have one. As a matter of fact, if you look a little closer you will notice that the subject is not human at all, but an Ange bihakumodel sex doll, manufactured by a company called Orient industry.
Don’t take it bad if you were fooled by its realism: after all, the purpose of the contest was precisely to show how similar to real people these dolls are.

Today, Orient industry creations are the most realistic simulacra on the market: the infamous American Realdolls are just deformed dummies next to them. The merit lies in 36 years of research and technological innovations, splendidly exhibited in the company’s “virtual museum”.
The artist is mr. Hideo Tsuchiya, who mantains that the scarily expensive dolls (they are about $8.000) have an important social role. «Elderly people today are much more spry than a decade ago» he said. «Maybe it is due to a better diet, and I suppose that in the future there will be more and more of them. Many of them don’t like visiting brothels and some of them with time lost any trust of females. I think the ideal would be to have a happy marriage and to live in a world with no need for such dolls, but since our society isn’t simple I am doing my best to make people’s lives easier.»

He was referring to things like the ultralight silicon used on aluminium skeletons, reducing the weight of the dolls to slightly over 30 pounds and making them easier to move even for weaker persons. The next step should be a device to warm the bodies to human temperature, but in the meantime the company website suggests to just wrap them in an electric blanket before use.
A curious aspect of it all is that many buyers don’t limit themselves to a purely erotic usage, but interact with the dolls in their daily routines – in example creating scenes like the one in the photo. Tsuchiya even offers a Buddhists funeral service should a client decide to end the relationship and literally dump his lover. And this isn’t the scariest part.

Examining the catalogue you can’t avoid noticing that many models have rather infantile traits and proportions. I could repeat the usual lecture about cultural differences, but Tsuchiya has a sincere answer: «What can I do? This is not a simple world.» And he is clearly right, especially when you discover a market for accessories such as the “anatomically correct plug”, to be used when the doll is not in use or “for taking photos”.
The obvious question is then: but how many customers can they have? Before the enigmatic smile of the company owner you have to look at the official financial reports. Expert analysts deduce they are selling a bit more than one thousand pieces per year. While you ponder on this, I suggest enjoying these two great reports from the Ange bihaku assembly line and its – way more terrorizing – American equivalent.

← Terrorists vs. sex vs. this guy Is this what 'Love the planet' means? →

Right now 5% of people with a repetitive job is daydreaming about sex.