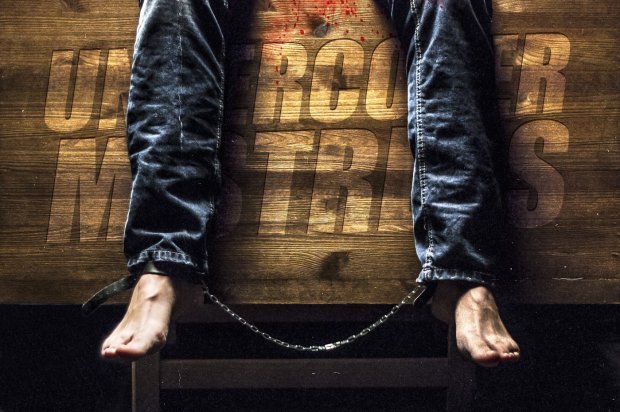 If you have never heard about Undercover Mistress you are in good company. I didn’t know anything about this Italian short movie myself until I stumbled on a brief article where its authors lamented the strange reactions their work unleashed among the juries of international – and especially national – festivals.
To learn more I got in touch with them, who turned out to be much more interesting people than I expected, and with a definitely stimulating point of view on how transgressive eroticism is perceived. We ended up having the conversation you can find below, after the trailer of the movie in question.

Knowing the full plot may help better understand some points touched upon in the interview, so you can reveal it by selecting the following section:

Shall we begin with your introductions?

Giulio – Sure! I’m Giulio Ciancamerla and I started out as a movie, literature and countercultures buff. After a number of no-budget shorts shot among friends during our teenage years I realized I had to really learn the craft, so I began a ten-years apprenticeship during which I also became a distributor and publisher of underground comics and fanzines.

Giulio – Undercover Mistress is the story of a male character who attempts to molest a female one, but roles get reversed and the whole situation goes belly up. The script comes from the fusion of an idea of mine with another one from Lucio, who I collaborated with for two horror movies. His was about rituals and BDSM, and I upped the ante with a story about the perception of revenge and the multilayered role inversion. We immediately realized that we had both been thinking about roles as a performance.
Lucio was more erotically inclined, and I wanted to give an outlet to my outrage and to address a thorny topic. Gender-based violence – not necessarily as rape – is still treated as an uncommon event instead of the result of an overall sexist culture infecting all social relations. The mass media and the traditional culture keep pushing reactionary and often sexist stereotypes. This may sound like a banal and old rant, especially within certain circles, but it is a fact that Italy is listed as the most trans-phobic European country behind Turkey. This is why I wanted to address these subjects under a horror and punk perspective, a nichilist one, without losing sight of a “fun”, somewhat ironic dimension.

Lucio – Talking with Giulio his “badder” and much more disrupting idea of my psycho-erotic concept popped up, and I really liked it. I was sold on the idea of returning to making movies that, like in the Seventies, provoke a reaction in their audience through an exploration of excess. Indie productions must be brave, not only in working on small budgets, but mostly in making those uncomfortable movies everyone is scared to do. And here we are.

Let me say that when I read of the controversy caused by your short film I was kinda perplexed. I liked the mechanism of continuously disrupting expectations and I found it really well done, but definitely not scandalous. Apparently you found it hard to have festivals accept it, especially in Italy. Can you tell me about it?

Giulio – I am so glad you liked it. When we completed the short we began systematically sending it to a bunch of horror, queer, post-porn, underground or generally “indie” festivals both in Italy and abroad. In brief, here in our country nothing happened. We got ignored more than censored: no negative answers beyond standard refusal forms informing us we were not selected.
I am aware of all the technical and content limits of a low-budget underground short movie that never pretended to be a blockbuster, so we kind of expected it. But yet again, we got more and more perplexed after the first American awards we won. It was working abroad, while in Italy we couldn’t even get to have it projected in our own town. In the end we entered four selections in Italy and the Aquila Horror Film Festival gave us the best short film award… but it is telling how it was a young people’s open vote. Maybe we lost contact with outrage, but it isn’t an outrageous short for us. Sure, I wouldn’t show it to my old aunt, but it isn’t even that “excessive”!

Lucio – The Italian society is bigot, hypocritical and still sees sex as a transgression instead of freedom of body and mind, so it will never understand such a film entirely. Italy lacks fantasy and irony, the two main ingredients of UM. It isn’t the movie to be outrageous and excessive, but the country to be reactionary.

Reactions were different abroad, though, weren’t they?

Giulio – The foreign reception was very positive. We got selected by over 40 festivals, receiving many awards and closing a deal for DVD distribution. Being selected for a festival is very important for a project like ours. Attending projections is stimulating and allows to discuss with the audience, to understand what they took out from your work.

Lucio – Abroad the film was understood and accepted for what it is: entertainment with a thought-provoking subtext. The final scene – Giulio’s idea – gives it an extranging, meta-cinema effect. Who is applauding whom? And why?

What caused this difference in reception, in your opinion?

Lucio – Culture and mindset. Other countries do have censorship and bigotry, but festival organizers and indie filmmakers are more corageous. They go for inclusion, not exclusion. In Italy the provincial mindset is boundless, while abroad they can see beyond labels and confines. Gender fluidity is a richness taht should be supported, not repressed.

And yet, I heard that the harshest reaction was in Germany. What actually happened?

Giulio – After Undercover Mistress was played at the Berlin Porn Film Festival, three young women interrupted the discussion with the full and appreciative audience. I surely missed something in the English conversation, but I understood that they were attacking the festival for having programmed our short film – especially without warning what it was about – then we got personally attacked. I tried to explain our intent: the weill to show only negative characters and challenge the audience with their negative mirror image, without a happy ending because they are pretty rare in the real world; the attempt to build a story on the ambiguity of the predator-prey roles, constantly overlapping male and female elements, but also the will not to be ambiguous on one point only: gender-based violence, which is biologically male just like it almost always is. From their point of view however ours was just a negative stunt because it reiterated sexist dynamics as seen from a white heterosexual male, so that the female character displayed a “wrong” male attitude that justified revenge. I don’t want to oversimplify, but just like with hardcore music, where the more direct and heavy you are, the clearer the message comes through, we wanted to show a concentrated negativity but surely not to glorify it. We are well aware that offering more keys of interpretation together can cause misunderstandings: you are free to read an ill invitation to do something if you wish so. Still, we wanted to tell a story and to suggest some interpretations without imposing them.
Since those events don’t allow a real dialogue (especially due to our linguistic limits with such difficult topics), the argument ended there. And yet before going home there also was a woman who offered her congratulations for having put into pictures her erotic kidnapping and rape fantasy. Everything is so subjective that choosing one side becomes impossible.

Lucio – Bigotry and censorship hide even in the most evolved environments. I am happy about the Berlin attack, because this means the film does agitate some strong reactions in the audience. I am not interested in being good or bad, but into creating breaking points that stimulate evolution and constructive thinking. Fulci’s cinema, exploding genres, has always been my compass. Now we are trying to explode minds and consciences toward freedom and happiness.

Giulio – My feeling is that beginning with the Eighties anything that challenged the status quo was targeted by an operation of filtering, assimilation and reprocessing in safer forms. Today it would be unthinkable to make Salò or The Grand Bouffe but within an underground context. As I said earlier, I don’t really follow the porn scene: I am instead interested in the representation of an explicit or non-normative sexuality in works meant for a mainstream audience. Kind of what Lars Von Trier and Gaspar Noé do. Fifty Shades is the filtered and predigested version, but I believe the function still exists, provided you have a critical approach to the social and cultural context. Sexuality doesn’t necessarily have to be portrayed as bleak or destructive (think of Haneke’s The Pianist), but in order not to be diluted by an apparently very open yet conservative and censoring cultural system it cannot be but dissident.

Giulio – Today the possibility to access a global audiovisual market allows to find everything and its opposite. So whatever I am imagining now has probably been done already – and it is available online. Still I imagine, or actually wish for, an even bigger separation between watching the infinite sea of masturbatory stuff on the web and the possibility of experiencing a spontaneous, realistic, uncompromised, multifaceted sexuality in movie theatres, maybe even in nonrestricted titles. It would have to be integrated in the plot, however, given that we are talking about real cinema here.

Talking about this, you are also organizing an actual post-post-porn festival, aren’t you?

← Welcome to the post-post-post-postmodern world, where online wars are waged against Nazi furverts Let’s ditch aftercare already (as it is commonly done) →