One of the funny things of thoroughly researching the ins and outs of extreme eroticismis that you gradually lose any prejudice about what a sexual practice “should” look like. Learning about endorphinic ecstasy or fisting gives you a whole different set of aesthetics that also includes the appearance of related sex toys – an outlook which uninformed people can have a hard time to grasp.
To make an example, somebody recently asking me about male solo play just couldn’t believe I wasn’t joking when I advised him to try a toy as bizarre as the Helix Syn. On the other hand, a well-meaning acquaintance who had just learned about my interests surprised me by showing up the same day with an awful lot of packing foam roll as a present. When I embarassingly asked her what inspired her to choose such an original gift, she answered: «Why, aren’t you into that fetish thing?» [Spoiler: not really. And in any case I don’t think I’ve ever heard of a polyethylene cushioning fetishist… but hey, it might come in handy someday!]

Those episodes reminded me of a set of half brilliant, half misguided Cracked articles listing ‘nightmarish’ sex toys. Whoever compiled those lists wasn’t always right: some of them are in fact pretty good fun – yet most of them most definitely are not. So, just to help you choose your next kinky present more wisely, I figured I could do a service by showing here what you should never, ever try out. Think of this post as a trip into the minds of the most deranged sex toys designers ever lived:

Fun fact: there are recorded cases of women whose genitalia lethally burst for the pressure of a dolphin’s ejaculation. You quite obviously don’t want to know more, but there is a possibility that the National Geographic-trained part of your brain is now remembering how the orca (aka “killer whale”) is the much larger, much more ferocious cousin of the dolphin. Do the math.

Thinking about it, if you have that kind of inclinations, this silicone reproduction of an orca penis might be your best spent money after all. The same shop sells bear, lion, kangaroo and other assorted mo

The thing you see pictured here is actually the non-vibrating version, so you are now required to make an effort and imagine this horror with an additional wire and one-knob remote control sticking out from behind its stub of a nose.

Done? All right: so please go on picturing your unmentionable finding its way between those radula-like alien protrusions hiding inside the mouth – possibly towards an eldritch, lovecraftian and very painful death. 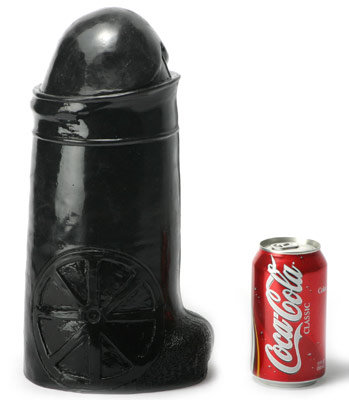 I’ll save you from the photographic forensics here: that’s 13 centimeters of diameter (5″ for you in the colonies). Do I have to say more?

It goes like this: first you put your partner inside the cage and hold her/his wrists in the dedicated overhead metal manacles, whose square edges will bruise the victim or possibly break a bone.

Then you take the sharp-pointed rods and screw them in the provided holders, setting them so that any sudden movement will impale the subject and puncture innocent internal organs. Then you think about it, shell out 22 dollars more and buy the double sharp-pointedrods, just to be nasty – and you eventually notice the suggestive-looking hole in the floor of the cage (which is padded, for we’d never want it to be uncomfortable).

You do everything you are thinking of right now – if you have a winch, or you’ll never manage to raise that contraption high enough – and if the ceiling hasn’t collapsed yetand the other person is still alive you decide to reverse the whole process and free your captive. So she/he finally gets the hands down, and promptly collapse for the sudden pressure drop due to blood circulation returning to the arms.

And you thought those facehuggers from Alienwere bad.

On the plus side, this is also available in lime green and chartreuse.

This has, at least, an interesting sociological slant. Can you imagine any real world setting in which such a product can have a reason to exist, not to mention be actually used by someone? I want your 1,000 words paper by Monday.

What you probably don’t see in the picture on the left are the suction cups on the fingertips and how they actually provided it with sort-of-orifices – probably meaning that whoever designed this knew at least one person who would copulate with such a thing if it just existed.

Oh. Come to think of it, that person was probably himself.

Whatever. If you feel so inclined, here is avideo review someone made of this “sex toy”.

The point of this device would be to allow the user to “bless” someone else (hopefully) with an urine stream flowing from the center of a Christian-looking cross.

According to the sale sheet, the bulging part – yes, it goes inside your urethra – is one centimeter wide. You don’t have to convert it to inches to know it is gonna be painful.

By the way, the whole point of fetishisms is to move the source of your arousal from the more natural, genetically-determined body features to other usually nonsexual parts – so the inclusion of a vulva there doesn’t have much sense for extreme foot fetishists either.

Truth to be told, this… er… “visionary” contraption famously received a shocked yet absolutely positive review which was so unexpected that it has been copied everywhere since on the Web.

The problem is that it is supposed to be plugged in your car’s lighter port and to be used while driving (hence the ‘auto’ pun), which I wouldn’t consider very safe nor self-respectable in case of any encounter with another motorist able to look inside your car. Also, it apparently gives a pretty good… snout, yet it totally sucks (ahem) when it comes to dealing with the results, making it goofy, horrific, dangerous and messy at the same time.

Let’s just say that finding a somewhat fit-to-publish photo of it wasn’t an easy feat.

Also, I really wish I was smart enough to think of something clever or funny to write about it – I just am not, sorry.

And I keep wondering about the statistical probabilities of someone just out of his mind enough to go for the wrong hole.

The sad truth is that I could go on with this post for many more pages, but everything has to end somewhere. So, given the holy and festive spirit of these days, I guessed that we could close on a classic.

Yes, this is just what the name says. And if you are the sort of religious fundamentalist who freaks out for “slightly” blaspheme things (seriously? What are you doing here, you pervert?), please be reassured: the same shop sells Buddha, Shiva, Devil and other multicultural religious insertables.

← Ashley Smith normalizes ponyplay If no politician suits you, try switching to a politician in a suit. A rubber, inflatable, animal suit. →