Let’s talk about polyamory with Poliamore.org 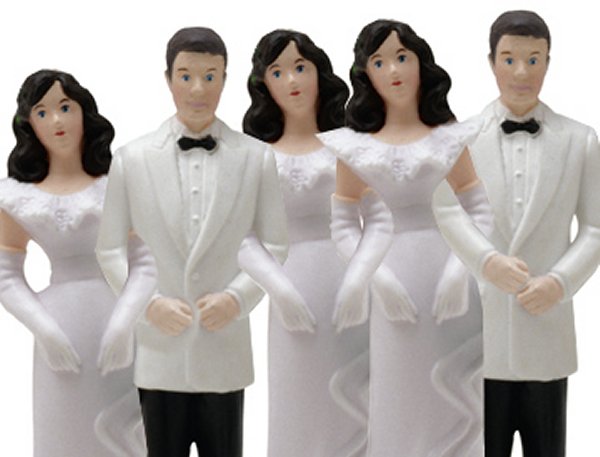 Unusual sex has its fads too. If 2012 was, in example, the year of BDSM on the trail of the obsessive marketing for 50 shades of Grey, my impression is that the current trend is pointing toward poliamory instead – relationships between three or more persons.
The topic is quite complex and rather muddy due to conflicting views of it, so I thought best to ask the biggest Italian authority about poliamory: the Poliamore.org website. And since the world has a great sense of irony, the person who answered my questions was Giorgia Morselli – who 20 years ago or so was my stage partner, and with whom in unsuspecting times I used to have long talks about tragically messy relationships.

Let’s begin with the basics: what does ‘polyamory’ actually mean?

The word includes many different ways to live realtionships in a non-monogamic way. This practically translates in relating with more persons towards one feels affection and emotional attachment (even without a sexual component) or simply not feeling the a priori limit of exclusive monogamy, which leaves the mutual possibility of having other relations beside the couple. Of course this also includes forming a couple with someone who is already attached to others. The common element is always the consensuality and the full awareness of everyone involved, without any subterfuge.
Adultery, which is to say covertly holding multiple relations outside the “official” couple is pretty widespread, so there was no need for a new term to indicate it. The neologism is instead a name for the experiences of those who openly chose not to limit their feelings, refusing the prejudice by which you could only “truly” love one person at a time.

And what is the role of Poliamore.org in all of this?

The site was created to share these experiences with a larger public, as it already happened in the United States and in other countries. Not out of exhibitionism, but to satisfy the need of reflecting together on the common unease we feel in a society where the traditional relational models don’t fit many people, yet acting on the alternative still feels weird. Our adventure began slightly over one year ago and it keeps giving us lots of satisfaction, because we are collecting lots of testimonies from people who feel elated in discovering they are not alone and most of all they are not condemned to hide and repress an important side of them. In the end it is all about admitting one simple truth: sentimental ties have been forever connected to lots of happiness but also to lots of suffering, and we believe in the possibility of living more serenely by finding a way of relating while being true to one’s self, without betraying the others.

It feels natural to ask how many polyamorists are there out there, how many in Italy and how many are part of your community.

In Italy, polyamory is too recent for reliable stats. The Facebook group where most of our dialogue happens counts about 630 members, many of whom joined after a poly family from Bologna was interviewed by Le iene (a hit Italian satirical TV show). You can find online articles about the phenomenon in the USA (in 2009, Newsweeksuggested over half a million polyamorous families), but those are obsolete data. The reference survey, with all of its limitations, was held by Loving more magazine on a thousand-strong sample of American polyamorists, and it asked about many topics including the presence of children.
We are seeing much interest about polyamory in the media, cinema and TV. The cornerstone is as always in the USA, where Showtime even produced a show titledPolyamory: married and dating. In Europe, France was the first country to translate The ethical slut, which is our reference book and which is coming out in Spain now, with an Italian edition translated by me and our staff planned for 2014. Radio and TV shows are interviewing us quite often, making us feel the responsibility of giving a correct image of what polyamory is. Where the interest is felt the strongest is however in face-to-face meetings and in the experiences exchange in the Facebook group, where we helped to raise topics and issues more common than you’d think.

Are you just popularizing, or has the site other goals as well? I am thinking in example of civil rights, or a poly-aware professionals network.

Our intent was to be a bridge between the community and the larger public: to intercept on one site the needs and instances of those living polyamory, and on the other to become the institutional referent on the outside. We want to be a realiable and up-to-date source of information, also sponsoring and coordinating the activities and the projects that are popping up spontaneously everywhere. We wish to let our experiences be known and you could call us activists, but not to proselytize: just to divulge an often ignored reality and possibly stimulate the discussion.
Another goal is to spread practical information useful to those living or planning to live a poly relation: about family issues, civil rights, legal tutelage and psychological support. Our only limits are the time and the energies of our volunteers.

Let me be the devil’s advocate here. I guess the most common suspect is that ‘polyamory’ is just an elegant way to say ‘fuckbuddies’. Am I wrong in saying that stable, closed three- or moresomes are an absolute minority?

I am going to answer you like you wouldn’t expect: yes, it can be that too. Polyamory is an alternative paradigm in the meaning of some words as well. There is a social prejudice for which a relation can be deep, engaging and important, but it cannot be “true” love if it leaves the door open to other relationships: it would be a friendship with benefits at the best. But polyamory is subjective, so the only person who can define what an important relationship is… is the person into that relationship – and screw definitions. The priority is to protect all the important relations, not to elect one as the only primary source of affective gratification. Thus we range from multiple ménages where every member is faithful to the others, to countless other complex forms. If each partner is consenting and informed about each other’s relational status, if there is honesty, respect and sense of responsibility for the needs and the feelings of everyone involved, we can well say it’s polyamory.

All right, so hear this one: what if polyamory is just a palliative or an escape from the inability to build a full, stable or normal relation?

If we take the traditional model as a reference, all the others get inevitably devalued and labeled as deviances. We could also ask whether monogamic relationships (be them real or façades) are palliatives or escapes from the inability of building a healthy network of multiple relations. We think there is no absolute “best” solution. Each form of relation comes with advantages and disadvantages, but we believe it is more important to critically think about the cultural reference models in order to be able to consciously choose the lifestyle that better fits one’s way of being and real needs. Everything in the world is changing rapidly: there’s nothing strange in trying to elaborate new relation forms too.
Who leans towards polyamory usually judges the monogamic model as inadequate, sometimes for a tendency to fall in love with multiple persons that strips exclusivity of value and meaning, or because he doesn’t share its ethical and philosophical principles. A polyamorist doesn’t simply want to have many simultaneous relationships, but offer himself and to his partners the opportunity to express and realize their feelings in a wholly transparent and honest climate. In our society which on one side judges non-monogamy as an evil, and on the other tolerates it if it is hidden, everyone has to ponder the emotional costs and benefits for the various options. Social pressure certainly makes hard choosing this way and finding similar people, so the strongest motivation is often to be true to one’s own nature and ethics.

Good. So let’s talk about problems. What kind of difficulties usually faces a polyamorist?

Many confide they are intimidated by the idea of not being able to manage the jealousy for their partner. Often those who choose polyamory did lots of self-examination about this, so much that several detailed analyses have been traced about jealousy, usually based on complex psychological theories. In example, many authors believe that ‘jealousy’ is not an emotion, but a sum of behaviors deriving from deeper issues, like the fear of being inadequate when compared to other partners, of being abandoned or to be excluded from important parts of the partner’s life and feeling unimportant. In fact these relationships strengthen intimacy and sharing, founded on the recognition that we are attracted to different partners for different traits. Naturally there is the problem of managing the time for the different partners to everyone’s satisfaction. Negotiation and communication are essential to build graceful agreements.

There must be advantages too…

Indeed, but they are subjective both emotionally and practically. Honesty about your feelings and sexuality however builds a deep intimacy and confidence, and that is probably the greatest benefit.

A couple of months ago I attended a poly-brunch where I was surprised by the presence of quite young poly-children. What kind of effect do you believe polyamory has on their lives, and how do people manage this?

This is a very sensitive topic that our staff is studying right now. There is only one scientific study about the parenting experience of a handful of American families, and we already discussed it on our website. The parents in poly families report a honest and sincere communication which helps emotional closeness and the internalization of positive role models, and more resources and flexibility allowed by sharing the burden of education and care between more persons. Among the disadvantages there is the risk of exposing the children to social stigma and a higher frequency of abandonment by parental figures exiting the relationship.
Among our acquaintances there are various arrangements: longtime poly people with grown-up kids; people with little children experimenting polyamorous relationships for the first time; persons involved in stable poly relations who want to have and raise a child together with all of their partners. We discuss the most appropriate way to educate the children depending on whether they always lived in a polyamorous environment or they spent their infancy in a monogamic setting; about how to introduce non-parenting partners to the kids; about the requisites for a partner entering a family context and about the best way to manage the relation with the children. Having a network of people sharing similar experiences makes it possible to compare different arrangements, and it allowed to talk much more easily with the kids as it gives them a reference model.

The muscle relaxation caused by orgasm is a surefire treatment for otherwise intractable hiccups.