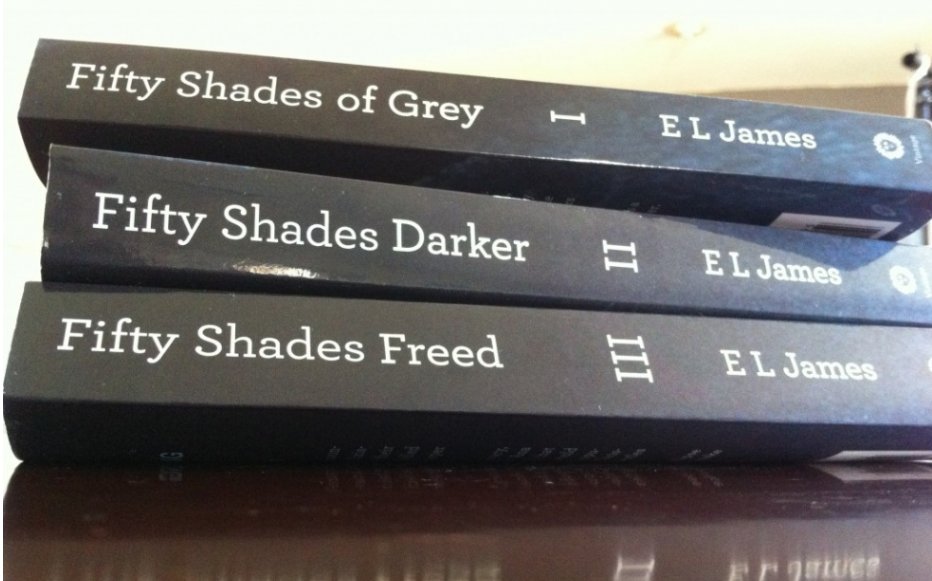 If you ever asked yourself what does extreme sadomasochism look like, take a look at the above photo. Pure agony comes in that shape: 1,664 awfully written pages which, given my job, I was compelled to read. A few weeks ago I had published my impressions about 50 shades of Grey, the first volume in the best-selling trilogy (over twenty million copies sold to date, not counting the many pirated digital editions out there) of placid Mrs. E.L. James. Proceeding with the two remaining tomes was then a moral duty of sorts, at least to see where was the cliffhanging story bound.
Let’s start then with a giant spoiler which will save you from having to replicate my stoicism record: they do live happily married everafter in the end. Who could ever have imagined that? From a certain perspective, however, it is interesting to see what happens before getting to that epilogue.

Conveniently considering Fifty shades darker and Fifty shades freed as one book, the main developments are basically these:

– They regret ending the relationship and go back to a contract-less and uncontrived relationship in which they freely experiment with light BDSM – and they marry;
– He reveals that as an infant he was neglected by his crackwhore mother and abused by one of her many men. Then, to leave no trauma out, he was abandoned with her mommy’s corpse for several days;
– Anastasia begins working for a publishing house, but her boss first molests her, then he stalks her. Who could ever suspect that a guy called Jack Hyde might have a dark, hidden side, huh?
– The mysterious “Mrs. Robinson” from the first book tries to keep her claws around Christian, but she only manages to alienate herself from the whole Grey dynasty. However, a psychopathic ex-slavegirl appears to torment the two protagonists without really obtaining anything much;
– It turns out that Jack Hyde had met Christian when they were young tykes, and he’s been envying him since then. So he make an attempt on Christian’s life – and fails miserably. Then he sides with Robinson’s husband to kidnap Grey’s sister Anastasia and request a ransom, yet this ends even worse for him;
– The main charater gets pregnant, he gets panicked, both take the event as a chance to calm down a little and come to terms with their inner demons.

Three stories in one

As you can easily guess from this summary, the Fifty shades trilogy is a somewhat schizophrenic work, goofily collecting at least three different narratives. The first one is a really bad thriller whose every element looks like it was thought up by a sugar-addicted twelve years old kid: just like Christian Grey himself was a cartoon character from the beginning, the same exaggerated tone reigns here. From exes capable of infiltrating a skyscraper fortress like they were ninjas to accountants organizing plans so nefarious that Al Qaeda would blush, the story is as plausible as an A-Team episode. And every single dramatic cliffhanger is always solved away with the very same cheap trick: «…but it wasn’t really anything serious after all, and everything turned out right.» Including the time Grey’s sabotaged helicopter crashes in the middle of nothing.

A second thread is pure porn. No criticism in that: just like in the first volume, these are the best written parts. Problem is, now that they are joined in the holiest bond of matrimony, the protagonists have many more occasions to copulate… and they aren’t missing one. This may be one of the reasons for the huge success of this saga among its public of repressed ladies, but the effect turns out to be quite different on those having a healthier relation with eroticism. You will like the first scene, and the second, and possibly slightly less the third one: when you’ll reach the thirty-eighth, however, you will probably just be skipping them – and Christian’s reiterated wonderful hair, and Ana’s tiresome “inner goddess”. You’ll also soon notice how Edward’s Christian’s unstoppable sexual power tends to have an instrumental role. Every time Anastasia has an – often justified – grievance to raise, the billionaire’s reaction is: «shut up and let’s fuck». Which actually is an efficient way to avoid discussions, yet inexorably kills any other couple dynamics.

And here we get to the third and most interesting narrative line, which is about the very evolution of the two main characters. His might be better defined, as a matter of fact, an involution: from the very moment he declares his love for Anastasia, his cold and perfect übermensch mask crumbles off reducing him to an insufferable puppet, terrorized of being dumped once again. Take into account his usual paranoid stalker and exhibitionistic parvenu traits, and you’ll ask yourself how can Ana not to strangle him in his sleep.
She, by the way, follows the very opposite path. While keeping her original clumsiness, she shows a pretty strong character, even achieving a couple of ridiculous performances as a second-rate Rambo, and gradually taking control of her life. In any case, James must be given the merit – like in 50 shades of Grey – of writing very human characters, full of doubts, awkwardly managing their love story and capable of the very same awful mistakes we all make in real life.

Right. How can we forget about pudgy Mrs. Erika Leonard, better known as E.L. James? I studied lots of her interviews in the past few weeks, and I’m convinced that her accidental superstar persona actually hides a pretty shrewd lady, as shown by a couple of answers she uses to repeat often. «Mrs. James, where do you think you are compared to Anäis Nin and Pauline Rèage?» ask her the more prepared journalists. And she, feigning embarassment: «Who? I never heard about them… I only read Harlequin’s romances!» Or, when the interviewer wants to go for naughtiness: «Do you enjoy BDSM games in your private life?» But she turns into the average British housewife: «I wish! My hubby is just not interested, unfortunately!» Funny, good acting. And her readers cannot but identify with her, dreaming not only of maybe meeting their own Christian Grey someday, but also to possibly become famous writers just like her.
I wonder if this is just a grand swindle. Maybe that woman is actually a wonderful writer, and she chose to make a poor impression in order not to alienate too many hairdressers. After all, she proved to perfectly know what her public wants, including a reassuring closing moral seemingly right out of those old He-Man, master of the universe cartoon show (which, incidentally, was the original title of her trilogy).
In the Greys’ case, it gets spelt out idiot-proof like: if you’ll dare a little experimentation with sexual fantasies you won’t need to turn into a scary pervert or a sacrificial victim. Kinky games can be a part of everyone’s life, making both you and your partner much happier. It is not that predictable, after all: excluding Secretary, domination stories in mainstream media usually end in blood. The only gripe is that we knew that already, with no need of enduring over 1,600 pages. Let us go back to the rest of this website now…

← An alternative championship for those who hate football Electrifying news: an alternative to violet wands →

33% of Quebeckers enjoys unusual sex practices, and 45.6% of the population is attracted to non-normative sexuality.