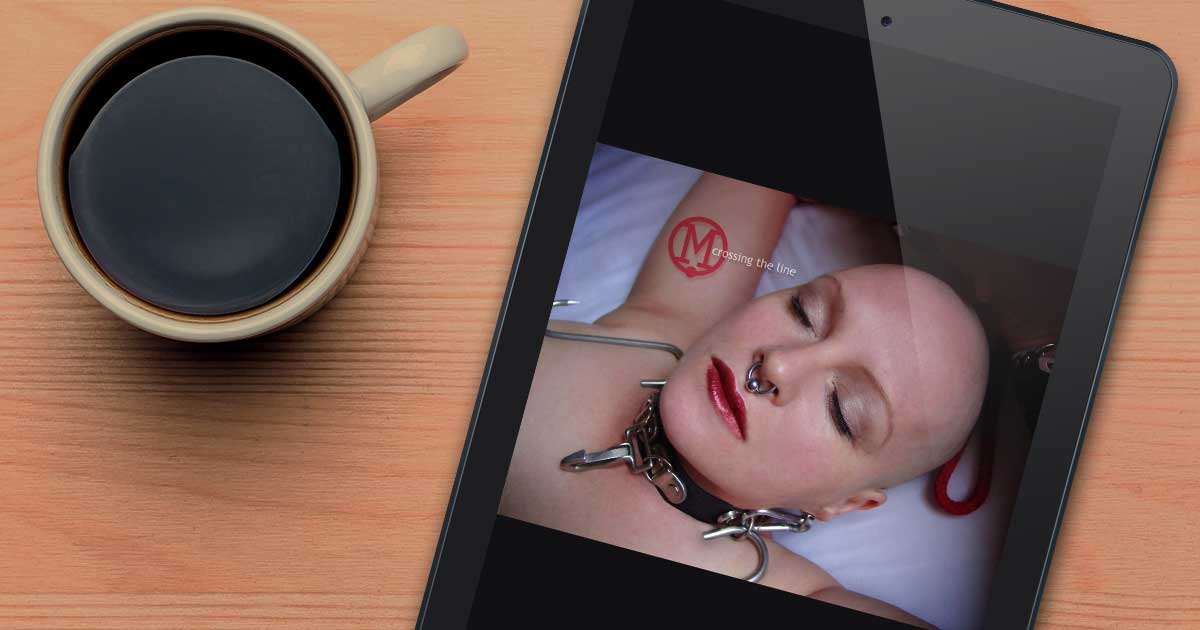 This is why the so-called Scene has been growing for decades. From its grim and fearsome origins, it has become a friendly, forgiving place for everyone. So nice. So… all right: so fucking bland it often feels unbearable to those who entered it following their darker fantasies. We all love safety and hugs, of course – but what’s the point of engaging in something so difficult, painful, silly and personal if it leaves you entirely unchanged? I’m not necessarily talking about life-changing epiphanies, but come on: would it be so bad to approach any form of sex a little more seriously than spending time at the mall?
While the prevailing attitude frequently leaves me baffled, there are exceptions. Exceptions so impossibly exceptional that they hit you in the face and force you to stop, take a deep breath and reconsider your whole vision. People so committed to their personal journey through the lands of extreme eroticism that you cannot but stare and feel awed as you try to come to terms with their reality. Case in point: slave M and her master, D.

You might have seen her before: her photos and videos are all over the Web. If you have not, please look for them now, so you’ll know what I am talking about. Your gut reaction has probably been less than favorable: M is far from being a traditional sexy model. The first words that come to mind seeing her pierced and marked body likely are ‘grotesque’ or even ‘insane’. The things she does with that body are even more unbelievable and off-putting to most. But that is exactly the point.
What you are witnessing isn’t someone conforming to social expectations, but a person who embraced her most visceral desires and passions, letting them shape her whole life. Not very differently from an Olympic athlete who spends all his life working out in order to train its body until it is fit to win a medal symbolizing his dreams, this woman has subjected her flesh to unending modifications to fit her (and his companion’s) ideal of eroticism, to fulfill her sexual dreams. With humiliating tattoos, oversized piercings, stretching, shaving and other actions most humans wouldn’t even consider possible. But still. In fact, this is not a lonely folie à deux: her website has a cult following, and if you are reading this you are obviously feeling a certain fascination yourself – or morbid curiosity at the least.

Crossing the line is a self-published ebook specifically conceived to satisfy that curiosity (and M & D’s exhibitionism). Due to the many color photos it contains it can only be read on iPads and desktop computers; another big drawback is its price, probably more fitting for a big paper coffee-table book. Both cons are however more than balanced by its content.
The book is a visual diary of more than ten years in the life of M, starting right at the beginning of her transformation and progressing toward her current state – which is said to be still a ‘work in progress’, the kind of definition usually reserved for artistic projects. The little text it contains is a surprisingly lucid narration of each step and its reasons. And there, after the visual shock has passed, lies what I liked the most.

D and M tell their story right as it is, without embellishments. Their candid honesty reports all the doubts, the fears and the joy of a unique lifestyle choice – without ever forgetting the love. For this is a love story after all, and much more romantic than anyone could guess.
Turns out that the two protagonists saved each other from dead-end lives. That their happiness was soon ruined by the shadow of a terminal illness, but the very “freakish” games that almost no-one can accept seem to be a better cure than most. That both M and D would strive to remain true to their roles no matter what… and when this very commitment endangered their relationship, love triumphed anyway.

As I reached the last page I sure had a different opinion on this unlikely couple. Even if I still won’t subscribe to various choices they made, they weren’t just eccentrics/artists/experimenters anymore. I came to view them as very beautiful fellow travelers on a path so close to mine and yours too, sometimes an example to aspire to and others a warning not to follow their steps – but always as another reference point in my map to understand the world of sexuality, and ultimately of life.
Thus I dare you. Face your prejudices and your fears, read Crossing the line and make up your mind, whatever it may be. Because no matter how you call it, erotic power play can indeed transform you and your life. Forgetting this would be a terrible disservice to yourself – and everyone’s map does so sorely need more reference points than normalized kink.

Acceptance issues among the 10 to 24 LGBT youth increase their suicide risk fivefold compared to heterosexuals.