The first part of this report from the most incredible sex shops in Japan raised quite a stir. Before reading on I suggest you to go and read the cultural frame I painted at the beginning. (And of course you can read the third part here)

For those with a less agonistic conception of sex there is instead a totally relaxing andvery specific sex toy, since it was designed to perfectly recreate the sensation of ‘a girl’s gentle and accurate tongue on your glans’. Maybe it even manages to, but the most striking feature is the wholly original form factor, matched by nothing else on the market. Either it was a wild guess, or they got something every other designer on the planed missed.

But what if you actually like the simple things in life? Well, probably you’d be in the wrong nation to begin with – yet naturally somebody thought of an alternative so classic it can’t be beaten. What about a hand?
Not just any hand, though. This glove is a perfect replica of female skil, and you can even apply nails and rings to it. If you just manage to overcome the feeling that it really looks like something a serial killer might enjoy, don’t forget to specify whether you prefer the left or right-handed version when you order it. 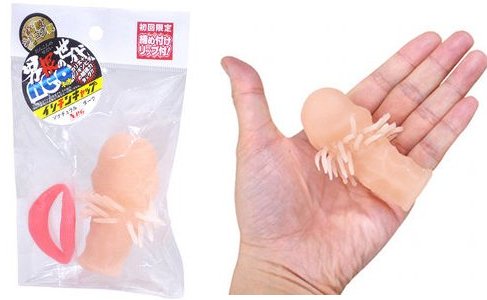 And what about the lips in the bag, you say? Oh, that’s a bonus toy with which Tanaka-san can try to console himself when the lady dumps him for a Neo isochin-enabled cucumber…

Kimokawaii Lovely Loveman – $99 Nowadays everybody knows that ‘kawaii’ is the Japanese word to indicate “cute and cuddly” things. Less known is the concept of ‘kimoii’ instead, or ‘ugly yet nice’. If you put the two things together, the result is this kimokawaii guy, who may not be very handsome, yet sports an adorable nose. A waterproof one. And a vibrating one, if you didn’t guess yet.

I know, I know, we’re already six items into this weird Japanese sex toys parade, and I still haven’t published anything remotely smelling of lolitism – so let’s see about that. The Satori “doll” is inflatable, practically flat chested, includes the omnipresent extra-tight onahole and… er… it’s transparent and very roughly shaped.
Is this a case of imagination power, as they chanted so many years ago? Possibly. But most of all, nothing can persuade me that the real purpose of this item is as a “training tool” to remove – or at the least to work around – the swimsuit included in the box. If you had studied the mentality of far Eastern perverts you’d suspect that too, believe me. 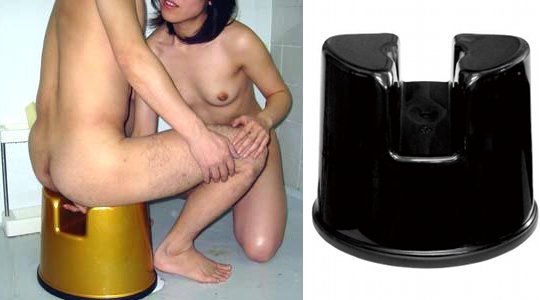 Now stop thinking evil thoughts and listen to some real culture. As the tourist guides say, Japan is the ‘land of a thousand contradictions’ and brothels are illegal there. Yet we are talking about the only nation in the world that managed to give a price even to faceslaps, so they predictably found a way to circumvent the law and keep the market open. Soaplands are the solution, and out of love for cleanliness men go there to get lathered by specialized attendants – who logically work in the nude. They can’t soak dozens of uniforms every day, after all.
As the above picture shows, the best way to ensure a thorough detersion of the clients is to use the dedicated stool, which in time became a sort of emblem for the soaplands themselves. How couldn’t you have one in your home too, then?

If you think about it, the great Japanese trait is their Sharper Image mentality, studying and manufacturing a dedicated tool for every single specific need, even when no sane person could ever feel it in the first place. To wit: it’s two hundred thousand years that homo sapiens jerks off without a second thought. Yet somewhere in the Oriental Empire somebody had a brilliant idea for an innovative product. That gentleman summoned a team of market analysts to evaluate it, research, organize panels and focus groups until they voted their approval. Then a purchasing manager went off looking for the ideal paper mill, the best packager and the ideal supplier for final assembly. In the meantime a graphic designer worked on the packaging, the instructions and the ads while somebody else took care of patents and brands. Then came the business negotiations with transporters, distributors and sale persons, not to mention the corporate conventions in which area managers were motivated like soldiers before a war.
To keep it brief, it was hard. But after all of this labor and their related investments, the world can finally get what it always needed. Jerkoff bibs, so you won’t soil anything. For those following other trajectories, I heard the company is already working on a satellite laser system inspired by the Israeli anti-missile barrier.

While we are on the topic, let me introduce something that was probably designed just to insult every strange sex toy from the West. The picture says it all, except that the techno-hand is controlled by wired remote. No comment is needed – at least until the next item.

It turns out that the robo-hand we just saw is the 2.0 version of another device now out of production where the fingers were replaced by a couple of straps used to secure the usual onaholes the otakus collect. Such idea was so revolutionary that it spawned countless imitators, among which the legendary Robotech Thruster shown below.

It isn’t produced anymore either, but please note:

a) The steampunkish control lever, designed after the engine throttle of a fighter plane;

b) The vise used to anchor it to something solid before use, made necessary by the power of its motor, capable of 5 faps per second – close to an industrial sander.

This notwithstanding, it seems that Japanese enthusiasts complained about the lack of advanced functions. While you wonder about where did they complain (is there a robotic dickshakers convention somewhere?), you will find comfort in learning that their laments were answered by another porn corporation that produced nothing less than the OnaMax Revolution – which was such a success that it was sold out throughout the archipelago.
Its secret lies in those pink corkscrew-like thingamajigs you can see in transparency in the first picture: while the main module goes back and forth, those secondary elements turn adding a further double stimulation. Isn’t that enough for you yet? So just look below: an impressive range of accessories was also designed for the Revolution, making it compatible with quite every other sex toy on the market.
I know what you are thinking: you’d better remember it for this guide’s next and last upcoming part, when I’ll show you the A10 Cyclone…